How is nuclear fusion part of the UK’s ‘green industrial…

Biden tells migrants not to come to US: ‘Don’t…


WASHINGTON (AP) — Lawmakers pressed the acting U.S. Capitol Police chief Thursday to explain why the force wasn’t prepared to fend off a violent mob of insurrectionists even though officials had compiled specific, compelling intelligence that extremists were likely to attack Congress and try to halt the certification of Donald Trump’s election loss.

Acting Chief Yogananda Pittman conceded there were multiple levels of failures that allowed hundreds of pro-Trump rioters to storm their way into the U.S. Capitol, overwhelming outnumbered officers and breaking through doors and windows.

However, she denied that law enforcement failed to take seriously warnings of violence before the Jan. 6 insurrection. Three days before the riot, Capitol Police distributed an internal document warning that armed extremists were poised for violence and could invade Congress because they saw it as the last chance to overturn the election results, Pittman said.

Her testimony drove home a seeming disconnect between the intelligence and the preparation. Lawmakers, who were witnesses and potential victims last month as well as investigators now, are trying to get answers to why this symbol of American democracy was overrun so quickly by a mob whose plans were online and known. 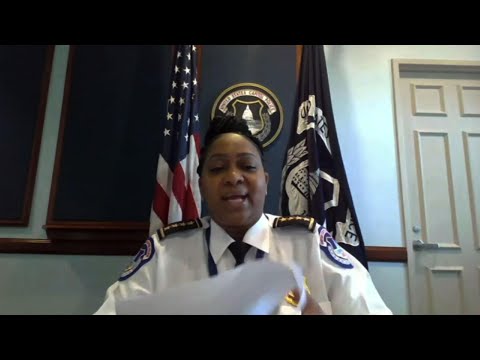 Reports aside, the assault was much bigger than expected, Pittman said.

“Although we knew the likelihood for violence by extremists, no credible threat indicated that tens of thousands would attack the U.S. Capitol, nor did the intelligence received from the FBI or any other law enforcement partner indicate such a threat,” she said. Later, under questioning by the House subcommittee’s chairman, Rep. Tim Ryan, Pittman said that while there may have been thousands of people heading to the Capitol from a pro-Trump rally, about 800 people actually made their way into the building.

Pittman’s testimony provided the clearest and most detailed picture so far that Capitol Police were so concerned by the intelligence that they took extraordinary measures, including giving assault-style rifles to agents guarding congressional leaders and having other officers waiting with evacuation vehicles for top lawmakers to flee the Capitol, if needed.

On Jan. 6, however, as the invaders wielded metal pipes, planks of wood, stun guns and bear spray, the vastly outnumbered rank-and-file officers inside the building were left to fend for themselves without proper communication or strong guidance from supervisors. The officers weren’t sure when they could use deadly force, had failed to properly lock down the building and could be heard making frantic radio calls for backup as they were shoved to the ground and beaten by rioters, with some left bloodied. Five people died, including a Capitol Police officer and a woman that police shot.

While Pittman said in her testimony that sergeants and lieutenants were supposed to pass on intelligence to the department’s rank and file, many officers have said they were given little or no information or training for what they would face. Four officers told The Associated Press shortly after the riot that they heard nothing from then-Chief Steven Sund, Pittman, or other top commanders as the building was breached. And officers were left in many cases to improvise or try to save colleagues facing peril.

One officer said the department did not hold planning meetings with rank-and-file officers prior to Jan. 6 as it does with routine events like holiday concerts. The officer and others who spoke to AP were not authorized by the department to speak publicly and were granted anonymity.

Thursday’s hearing highlighted specific intelligence failures. Lawmakers focused not only on the Capitol Police force’s own advance assessment of threats but on why senior department officials never reviewed a report from the FBI that warned about concerning online posts foreshadowing a “war” at the Capitol. That warning made its way to investigators within the police…

Letters: Kneeling during the anthem

How the Capitol Riot Suspects Are Challenging the Charges

Analysis | Data about the Capitol rioters serves another blow to the White,

Eye-gouging Capitol rioter in “shock” over detention with…

Who Are The Oath Keepers? Militia Group, Founder Scrutinized In Capitol Riot Probe

FBI arrests second Minnesotan this week in connection to Jan. 6 storming of U.S.