Red Hat withdraws from the Free Software Foundation after…

US Navy’s soft sugar cookie recipe from WWII, and how…


WASHINGTON — US Secretary of State Antony Blinken said Tuesday that “hundreds” of US sanctions will remain on Iran even if the United States rejoins the 2015 nuclear accord.

President Joe Biden’s administration has been engaged in indirect talks with Iran about reversing former president Donald Trump’s exit from the accord, formally known as the Joint Comprehensive Plan of Action (JCPOA).

“I would anticipate that, even in the event of a return to compliance with the JCPOA, hundreds of sanctions remain in place, including sanctions imposed by the Trump administration,” Blinken told a Senate hearing.

“If they are not inconsistent with the JCPOA, they will remain unless and until Iran’s behavior changes,” he said.

The discussions in Vienna, brokered by European diplomats, have been locked in dispute on which sanctions to lift. 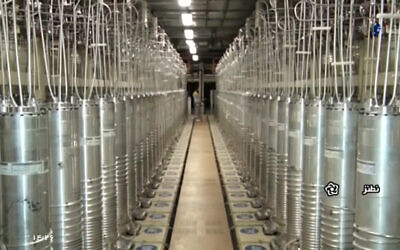 In this image made from April 17, 2021, video released by the Islamic Republic Iran Broadcasting, IRIB, state-run TV, various centrifuge machines line a hall at the Natanz Uranium Enrichment Facility, Iran. (IRIB via AP)

The Biden administration is ready to end the sweeping measures imposed by Trump — including an effort to stop all of Iran’s oil exports — if it reverses the steps away from the nuclear deal that it took to protest the last administration’s sanctions.

But Iran has insisted on the removal of all sanctions — while the Biden administration has insisted that some will remain if they were imposed over other concerns, including human rights and Iran’s support for terror groups and extremist movements.

Blinken reiterated support for returning to the nuclear accord, with which UN inspectors said Iran was complying before Trump pulled out the United States.

Asked about concerns that Iran did not declare all activities from before the nuclear deal, Blinken said: “Plain and simple, we would be in an even better place to insist on it answering those questions if we had managed to get Iran back into compliance with the JCPOA and if we were part of it, too.”

“But regardless, it needs to answer those questions. It needs to come clean about past activities,” Blinken said.

Times of Israel staff contributed to this report.

I’m proud to work at The Times of Israel

I’ll tell you the truth: Life here in Israel isn’t always easy. But it’s full of beauty and meaning.

I’m proud to work at The Times of Israel alongside colleagues who pour their hearts into their work day in, day out, to capture the complexity of this extraordinary place.

I believe our reporting sets an important tone of honesty and decency that’s essential to understand what’s really happening in Israel. It takes a lot of time, commitment and hard work from our team to get this right.

Your support, through membership in The Times of Israel Community, enables us to continue our work. Would you join our Community today?


Join the Times of Israel Community

Already a member? Sign in to stop seeing this

You’re serious. We appreciate that!

We’re really pleased that you’ve read X Times of Israel articles in the past month.

That’s why we come to work every day – to provide discerning readers like you with must-read coverage of Israel and the Jewish world.

So now we have a request. Unlike other news outlets, we haven’t put up a paywall. But as the journalism we do is costly, we invite readers for whom The Times of Israel has become important to help support our work by joining The Times of Israel Community.

Read More: Blinken says hundreds of sanctions to remain on Iran even if US rejoins deal

Questions raised after US State Dept tweet about Shi’ite charity

US State Department: We support opening accession talks with Skopje and Tirana

Former State Dept. Official Pushes Back Against Idea He Interfered in Lab Leak

Boris and Biden: A diplomatic odd couple faces pressure to define the US-UK